Gen Z Says They’re Eager to Use Big Techs for Banking – But Will They?

This article was published by The Financial Brand

Younger consumers love the ease of using big-tech platforms, but they also like an in-person option. For many traditional financial institutions, this contrast may mean that in the near-term big techs may be less threatening than competition from a handful of large banks that are bridging the digital-physical gap in ways that appeal to both Gen Z and older generations.

Here are a couple of fascinating facts for retail bankers to chew over: First, nine out of ten — 90% — of Gen Z respondents would consider obtaining a banking account from a nonbank company, and more than half (53%) of consumers overall would do so.

Second, 85% of Gen Z consumers say that for certain types of financial accounts they would only apply for them in person. For consumers overall almost two-thirds (64%) say the same.

While it’s true these are attitudinal “would you” questions, not descriptions of actual behavior, the sheer size of the numbers on two sides of the digital banking question — coming from the same respondent base — is eye opening.

Veteran financial services researcher Bill McCracken, President of Phoenix Synergistics, which fielded the national research, has a couple of key takeaways from this pair of statistics:

Two large retail banks that currently are getting this new digital/physical formula right are Bank of America and Capital One, says McCracken. Another, smaller, institution he singles out is Umpqua Bank with its signature Go-To banker program that enables every customer to have their own personal banker, reached digitally through its mobile app.

The Phoenix Synergistics survey, based on detailed online responses from 1,500 consumers collected in August 2020, focused on how the customer journey in banking has been changed by the rise of digital banking. In an interview with The Financial Brand, McCracken elaborated on several of the most significant findings.

Banking with Nonbanks Would Be Simpler

The research does not contradict the importance of digital transformation among financial institutions. If anything, the willingness of a majority (53%) of all consumers to obtain a banking account from a nonbank company affirms its importance.

More than that, the fact that nine out of ten Gen Z respondents are willing to turn to nonbank companies for banking accounts is more than eye-opening, it’s an “overwhelming” number, as the report states. 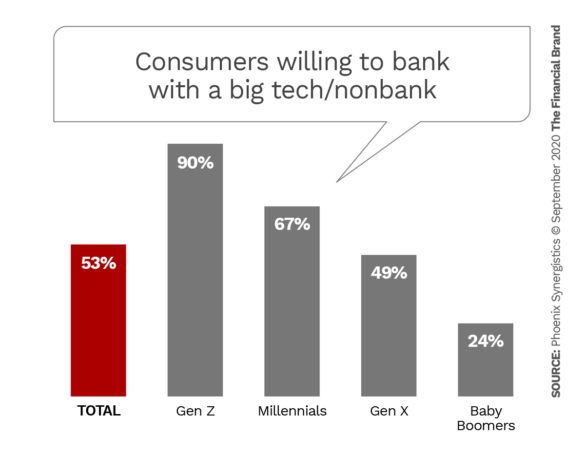 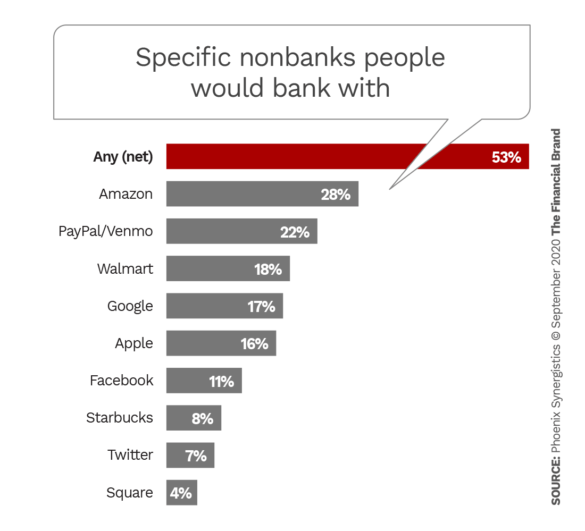 Amazon topped the list of specific nonbank companies consumers would be willing to do banking with, followed by PayPal and Walmart. Clearly youth reigns here as just under a quarter of Baby Boomers feel comfortable banking with big techs. As McCracken observes, even though older consumers use these digital platforms, Millennial and Gen Z users are much more comfortable with them. Younger consumers apply the same mindset for buying a new mobile phone case online in under five minutes to acquiring a checking account or a credit card or a mortgage, he states.

Baby Boomers, on the other hand, sometimes have difficulty online — knowing where to go next or what to click, says McCracken.

“They’re thinking, ‘A mortgage is a complicated product, do I want to do that on Amazon?’ It’s a whole different mindset between those two generations,” he observes.

Overall, the main reasons why so many consumers are willing to consider doing banking with big tech firms are more advanced technology and faster/easier processes, according to the survey. 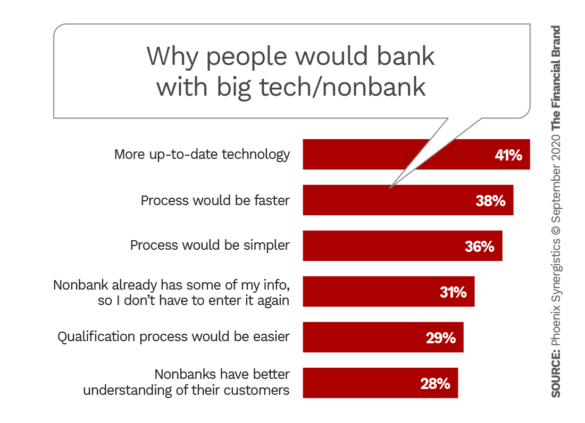 “All this should be a message in neon to financial institutions,” McCracken states. He’s not sure how many have gotten the message, however. There are so far only a handful of what he calls technologically progressive financial institutions, including the ones named earlier. “Bank of America is trying to be very close to an Amazon type of experience,” the researcher states.

Traditional Advantages to Build On

If the competitive challenge seems daunting — and for many institutions it is —, consider that the research also found that incumbent primary providers of banking services have an edge in getting additional business from existing customers. 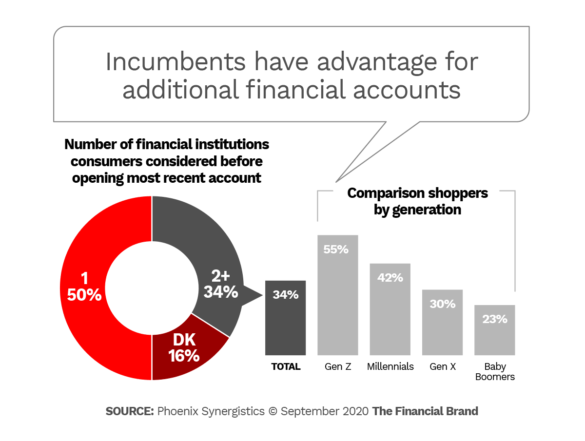 However, once again, age is a major factor. While a minority of older and middle-aged consumers (and even Millennials) comparison shop among multiple financial institutions when looking for a new product, more than half of Gen Z do this.