‘Tis the Season to Rewind: A Closer Look at Recycled Holiday Advertising

In a time where the holiday ad space is cluttered with brands competing for shoppers’ attention with new campaigns, is the use of recycled ads an effective strategy?

Using our in-market ad performance measurement solution Phoenix Brand Effect, we analyzed several campaigns from various brands that utilize recycled advertising to see what factors contribute to their success or failure. Here’s what we found:

When it comes to the holidays, at least in recent years, few campaigns are as recognizable as those featuring Coca-Cola’s Polar Bears. Dating back to the 1990s, the Coca-Cola polar bears have not only become a popular brand icon, but the integration of the polar bears in holiday ads has caused them to become a sign that the holidays have arrived.

This is a prime example of how established brand icons like the polar bears can ensure strong performance year-after-year, as viewers don’t have to learn the brand as they would in a completely new campaign.

By contrast, Taste the Feeling, another one of Coca-Cola’s recycled holiday ads that has been running since 2014, featured minimal brand cues or brand icons (like the polar bears) throughout the creative and has virtually no connection to the holiday season.

The key to the high performance of Polar Bears was the integration of strong brand cues (the polar bear brand icon) and the overall holiday theme, both of which were missing from the Taste the Feeling ads. 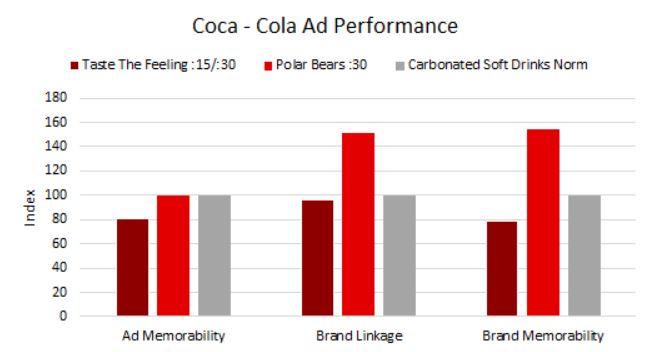 You can’t watch TV during November and December without seeing a Pillsbury baking ad (just the thought of a warm crescent roll baking in the oven is enough to get your mouth watering).

By contrast, their Pie that Pops ad that appeared in the same campaign as Holiday Cookies (but only ran from 2013-2014), performed very differently. 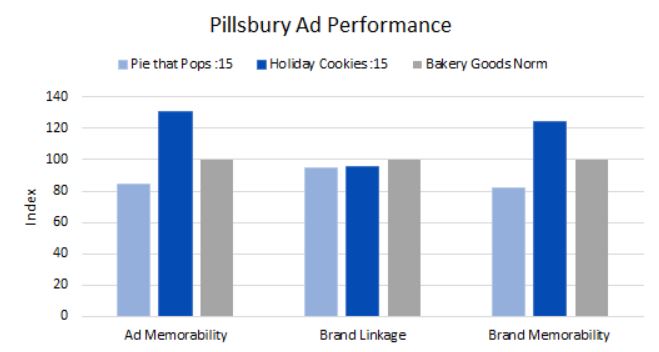 Another fan favorite that has been airing since 1996 is the classic M&M’s They Do Exist holiday ad.

With the addition of the holiday themes throughout and the sense of nostalgia it evokes, this ad started strong and continued throughout its long flight.

Like the M&M’s, the Hershey’s Carol of the Bells ad, which features a group of Hershey Kisses ringing like bells to ‘We Wish You a Merry Christmas,’ significantly exceeded the Candy & Mints norm across brand delivery metrics. 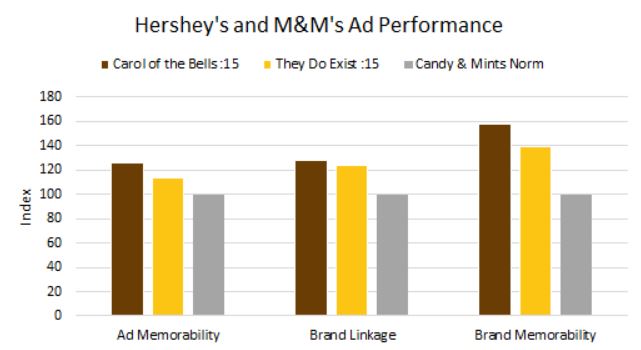