Enhancing Ad Tracking to Get the Most Out of Your Campaign

Our client, a large health system, was launching a new ad campaign in 10 US markets, which crossed multiple media channels, from TV to billboards to online.

Phoenix MI proposed enhancing the value of the research by running statistical analysis such as marketing mix & return-on-investment models to gain insights into the marketing campaign’s influence on new patient registrations.

In addition, we used our core brand and ad tracking platform, PatientView™, to evaluate the ongoing recall and impact of the ad campaign in both the test markets as well as several control markets for comparison. These analytics helped identify how much each media channel contributed to bringing in new patients in each of the 10 test markets.

The ad tracking analysis that Phoenix provided gave valuable insight into the markets and advertising, which allowed us to give a formal recommendation on how to proceed with the campaign.

The ad tracking analysis showed that three of the markets had high potential to generate incremental patient registrations with additional investment given higher receptivity to the campaign. Further, billboards performed particularly well in several of the markets, and the ROI simulations pointed to increased spending in some but not all markets. Television proved important early in the campaign, but the tracking analysis showed diminishing returns after about six months in most markets; we recommended pulling the ads at that point. 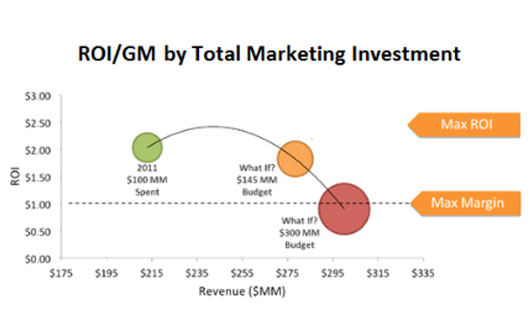